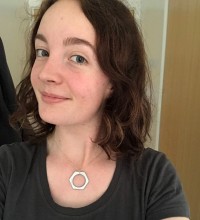 A journalism student beat the nationals to an exclusive on a football manager’s near-death experience with coronavirus.

Lucy Roberts, who studies at the University of Central Lancashire, spoke to Chester FC boss Anthony Johnson about how he had to be shocked back to life by paramedics and “thought for a day or two that was it” after he was hospitalised by Covid-19.

Mr Johnson’s ties with the Preston-based university began during a question and answer session he had previously held with first-year journalism students.

The partnership led to him “entrusting” Lucy to tell his story, which has since been covered by both regional and national titles.

Second-year student Lucy, pictured, told HTFP: “I knew that to get the most detail about what Johnson went through I just had to ask him to tell me what happened to him from the moment he returned a positive test up until he answered the phone to talk to me.

“The hardest part of the interview was hearing the terrible things he went through and not knowing how to react or what to say – not that he wanted any sympathy, he just wanted people to hear his story.”

Mr Johnson had not had his first vaccination against Covid-19 at the time he fell ill, but is now encouraging people to come forward and do so.

Lucy added: “It was great to have such a positive reaction and to hear today that some people have gone out and got their jabs after reading the interview has made me so happy and realise that by telling Johnson’s story it could potentially save people getting seriously ill.

“Also, to see people sending me pictures of my byline in the newspaper for the first time is a pretty great feeling.”

Steve Canavan, course leader for Sports Journalism at UCLan, said: “We’re very proud of Lucy and she should be immensely proud of herself too.

“She’s a fantastic student and is a joy to have on the course. She’s produced a first class piece of journalism and also had the wherewithal to realise pictures are crucial to the overall story and secured some really striking images.

“As soon as students come on the Sports Journalism course, we encourage them to get out and talk to people in the real world, and this shows what can be achieved when they do that – a first class story that you can only get by picking up the phone.

“We’d also like to thank Anthony for speaking to Lucy and entrusting her to tell his story.”