A galaxy far, far away provided inspiration for a regional daily’s splash after Star Wars production crews began filming on its patch.

Blackpool daily The Gazette spoofed the opening titles of the sic-fi film franchise on its front page after revealing crews from E&E Industries at Pinewood Studios had begun arriving on the Fylde coast for eight days of filming.

According to The Gazette, the filming is understood to be for a new TV spin-off based on Star Wars film Rogue One entitled ‘Rogue One: A Star Wars Story’s Cassian Andor’.

Editor Nicola Adam explained the idea behind the splash. 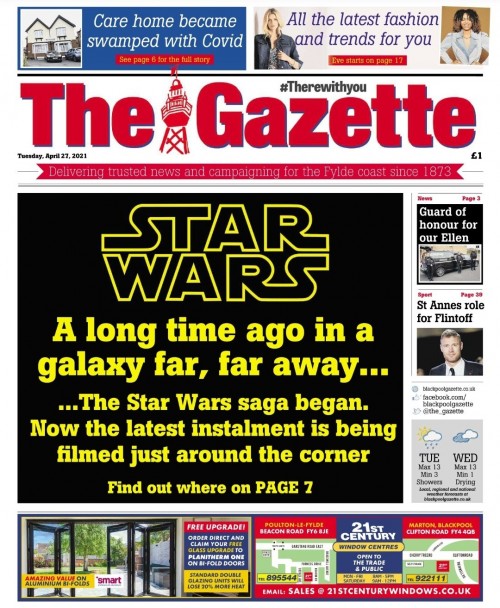 She told HTFP: “Following lockdown and with the world opening up Blackpool is feeling optimistic.

“We have been determined to stay upbeat and introduce more fun to the title to reflect this in the next few months, as we support communities and businesses getting back on their feet through the #getblackpoolback campaign.

“The Star Wars filming is the biggest topic of chat in the area, with a huge buzz about it online and lent itself to something different.

“The front page idea was conceived by news editor Simon Drury and designed by Aidan Turner. Simple but effective.”