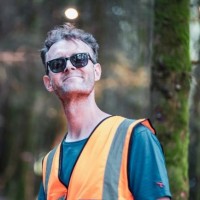 A former sports reporter and music promoter who gave Arctic Monkeys one of their first gigs has died aged 47.

Tributes have been paid to Matt Evans, who worked for Sheffield Newspapers before going into public relations and events management.

Freelance Matt, pictured, covered Sheffield’s club and music scene between 2003 and 2007, as well as Chesterfield Football Club for three seasons.

He emerged as a successful club promoter and gave Arctic Monkeys one of their early gigs.

Matt was later credited as ‘Curly Matt’ on the band’s Beneath the Boardwalk collection of demo recordings.

More recently, he had his own radio show on Ribble FM, served as Clitheroe Grand Theatre’s programme manager and was promoter of the Cloudspotting music festival.

In an obituary, Lancashire Telegraph features writer and Matt’s friend Tony Dewhurst wrote: “Just spending a few hours with Matt or sharing a cup of tea with him was an educational experience because he was a creative force for good.

“And the torrent of tributes from heartbroken friends, all who were touched by his presence, is testimony to a man who made his own giant footprint in life and who had that rare ability to make everybody feel special.

“Matt had an incredible zest for life, bubbling over like a gushing mountain Lake District stream in full spate.

“He was wise but never precious and there was always a beautiful chaos surrounding his life.”

Matt, who had worked for the Grand Theatre since 2009, had previously undergone “major heart surgery”, according to Tony.

Steven Lancaster, manager at the theatre, told the Telegraph: “I will always have an incredibly loving memory from the last time I saw Matt.

“On the final evening of Cloudspotting this summer we were sat round the fire pit, chewing the fat about the festival.

“I looked up, and there was Matt, with a can of craft beer in his hand and sporting a wide grin.

“He was just in this happy place.”

Matt was married to Judy and had two sons, Roscoe and Marlon.