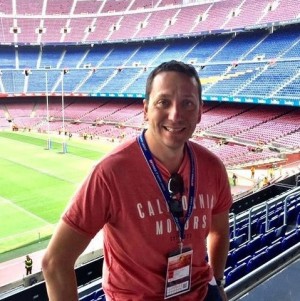 A sports editor is leaving a daily-turned-weekly after 20 years for a new journalism training role.

Phil Wilkinson has announced his departure from the Wigan Post after two decades of service.

Phil, pictured, will be taking on a “new challenge” as journalism tutor at News Associates in Manchester.

He is also beginning a part-time role with a national newspaper.

In a farewell column, Phil told readers he had had an “incredible time” working for the newspaper, which made the frequency switch from daily to weekly in August.

He wrote: “But here’s the thing; working on sport in Wigan, it’s not felt like a normal local paper.

“I’ve been on courses with counterparts from titles at much bigger towns yet they have non-league and amateur rugby union on their back pages.

“Here, while our grassroots scene is thriving, we’re also blessed with two great clubs and a list of athletes and coaches who make their mark.”

Phil went on to note the media landscape had “changed radically” since his arrival at the Post in 2001.

He added: “But in an era when clicks are king, I’ve tried to stay loyal to the basic, journalistic principle of making sure a rumour was true before writing it.

“Now, this is the part when I could use age as an excuse for my departure.  But that wouldn’t be true, because there are plenty of older men and women doing fine jobs in similar roles, up and down the country.

“I don’t know who will succeed me. My colleague Paul Kendrick – an equally good friend and reporter, with equally questionable taste in music and food – will cover in the short term.

“As for me, I’m excited to be moving on to a new challenge as journalism tutor at News Associates in Manchester.

“I’ll have a part-time role with a national newspaper, too. I may even tackle another book at some stage, and I’ll be at the DW Stadium writing the occasional report as a freelance.”