Two sister dailies have doubled a reward for information about a murdered taxi driver almost 40 years after he was killed.

Aberdeen dailies the Press & Journal and Evening Express are offering £20,000 for anyone with information leading to the confirmed identification of the killer of George Murdoch.

The 58-year-old was found dying on the ground outside his sky blue Ford Cortina taxi in Aberdeen 38 years ago last week.

The case has been dubbed that of the ‘Cheese Wire Killer’. The new reward featured on the front page of the Evening Express yesterday, pictured below. 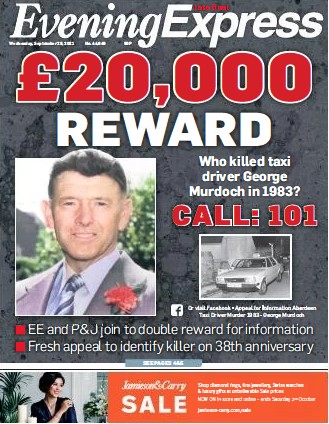 George’s nephew Alex McKay told the Evening Express: “As time moves on and, despite significant efforts by the police and others, we are still searching for that one elusive piece of information to solve this case.

“Now though, due to the unexpected and overwhelmingly generous gesture made by Aberdeen Journals, the reward now stands at £20,000.

“This really could be a game-changer and might just produce that vital tip needed to bring closure.

“We have always felt very strongly that there are people still out there who can put a name to the killer, or who may have information which they have been holding on to all these years, but may not know just how important it is.

“The police can solve this case, but they need the critical information to do so and that is still out there.”