Sir Paul McCartney is behind a series of mysterious advertisements to have appeared in regional press titles, it has been revealed.

The former Beatle has recently taken out adverts in the Manchester Evening News, Liverpool Echo and Scotland’s Daily Record.

The ads tell readers that “Grandude and his four chillers are looking for their adventure-loving Nandude”. 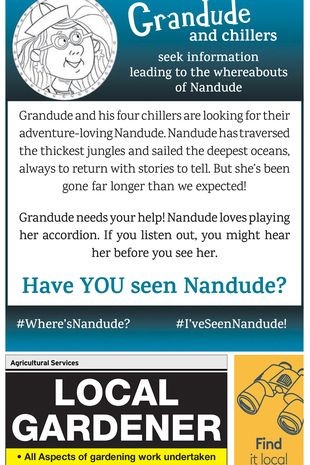 The ad placed by Sir Paul

According to the Daily Mirror, sources say he chose the specific regional papers because the areas they cover all “hold very personal memories to him”.

The Liverpool native is said to have “enjoyed gigging in Manchester with the Beatles, Wings and also as a solo artist”.

He has also owned property in Scotland since 1966.

The full ad reads: “Grandude and his four chillers are looking for their adventure-loving Nandude.

“Nandude has traversed the thickest jungles and sailed the deepest oceans, always to return with stories to tell.

“But she’s been gone far longer than we expected! Grandude needs your help! Nandude loves playing the accordion.

“If you listen out, you might see her before you see her! Have YOU seen Nandude?”