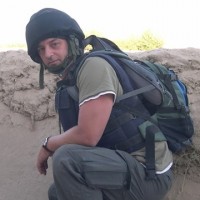 A journalist who reported from Afghanistan for a regional daily has warned future military intervention in the country is now “inevitable”.

Mark, pictured, filed reports from Afghanistan on several occasions while embedded with the British Army when he was Eastern Daily Press defence writer.

In a piece reflecting on the situation for the EDP and his time covering the country, he has now warned “the problems of Afghanistan are the problems of the world”.

Mark wrote: “The post-9/11 mission to Afghanistan was designed to make the world safer, to eradicate the hiding places and training grounds the Taliban provided for terrorist groups to plan and launch attacks on western targets.

“With the Taliban back in control, and seemingly on the cusp of seizing overall power, there is the likelihood that this barren mountain country will again become a base for terror.

“It may well transpire, that we all could yet pay the price of the Taliban regime returning to power.

“Yet first and foremost, we should think about the people of this amazing country, forcibly returning to life under the medieval-style governance of a primitive, terror-loving, movement which will again cast a frightening shadow way beyond the vast, rugged, and empty landscape of Afghanistan.

“Military intervention from the west will be inevitable if global security is to be preserved. Twenty years on, we may well be back to square one.”

HTFP reported last week how Stephen Stewart, of Dundee daily The Courier, had shared his sadness at the country’s “collapse into anarchy”.

Stephen initially visited Afghanistan as an embedded reporter before serving as a soldier after his trip inspired him to join the Army.