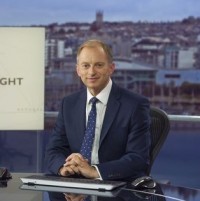 A regional news veteran is set to pass on his knowledge to the next generation of journalists with a new university job.

Justin Leigh will be taking up the post of associate lecturer in journalism at Plymouth Marjon University following his departure from the BBC.

Justin left the BBC after 33 years – including two decades presenting its Spotlight regional television news programme in the South-West of England – in October.

Speaking to Plymouth Live, he said he was “really looking forward” to the new challenge.

Justin, pictured, added: I’ve done a little bit in the past on a voluntary basis, in offering advice, and to see them grow in ability just from what I’ve been able to tell them is very satisfying.

“And after a lifetime of being in front of the camera, I’m really looking forward to getting on the other side for once.”

Justin went on to discuss the changes that had taken place during his time in the industry.

He said: “The fundamentals of telling a story haven’t changed. You’ve still got to find the hook, the top line, and tell it in a succinct and engaging way.”