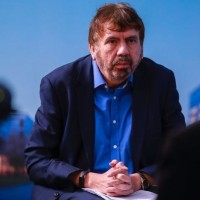 A former regional journalist who was working in China has died aged 60.

Tributes have been paid to Andrew Moody, former group news editor of the Lincolnshire Standard Group and business journalist at the Manchester Evening News.

Most recently he had been working for China Daily at its Beijing headquarters.

Andrew, pictured, died two weeks ago in his apartment in the Chinese capital, having been diagnosed with motor neurone disease in 2017.

In an obituary, former colleague Nick Jaspan wrote: “Always one to play his cards close to his chest, he told few of his condition, with his subsequent death coming as an unwelcome surprise even to those that had been regularly in contact with him.”

Nottinghamshire-born Andrew studied for his NCTJ qualifications at Darlington College and joined the Gainsborough News as a junior reporter.

He later moved to the Scunthorpe Star before being swiftly promoted to the newsdesk at the 20 titles that constituted the Lincolnshire Standard Group.

Andrew secured his first overseas posting as business correspondent on the Gulf News, before returning to the UK for a similar role with the MEN.

He then had spells as Granada TV’s first business correspondent and City correspondent of the Daily Express, before turning freelance.

A “growing fascination with Asia” led him to join the China Daily, initially on a temporary basis to help cover the 2008 Beijing Olympics.

He turned full-time in 2009 as a senior business correspondent, but within two years he had been made senior correspondent of the group’s burgeoning number of overseas editions.

Nick wrote: “Among his friends, there was some disbelief that this instinctive one-nation Tory and occasional Lib Dem canvasser was now a convert to Communism with Chinese Characteristics.

“Even in private, though, he remained loyal to the party line, while still being as entertaining and affable as ever.”

He added: “A keen fan of football, cricket and the UK’s political intricacies, he was a complex figure and something of a loner by choice.

“The consummate Englishman abroad in many senses, while his apparent conversion to CCP cause startled many who knew him, his warmth and innate decency ensured that few were alienated by the convictions of his later years.”

Andrew is survived by his parents and a sister.