A regional publisher has created a new interactive map of UFO sightings across its circulation areas.

The map allows readers to explore sightings dating back to 1997, including some incidents which were covered by the publisher’s Aberdeen-based dailies the Evening Express and Press & Journal and Dundee-based dailies The Courier and Evening Telegraph at the time they happened. 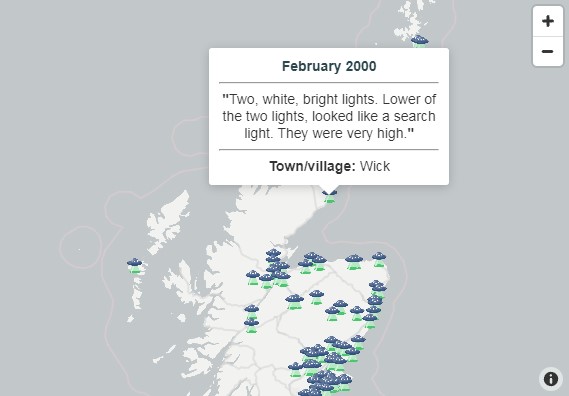 A screenshot of the interactive map

Kirstie told HTFP: “Working on the nostalgia team I think there can be a perception that ‘history’ is just stories about wars, and black and white photos.

“There is definitely a place for that, but we like to tap into the living memory of our readers and the lighter, or more fun side of history too.

“I recently wrote a story looking at the real-life truths behind the storyline in the BBC Scotland submarine drama Vigil, which inspired me to research other ‘stranger than fiction’ phenomena, and UFOs seemed like a good place to start.

“I went through the archives of our four titles The Courier, Press & Journal, Evening Telegraph and Evening Express to the 1950s, and searched for stories about readers’ unexplained, and at times amusing, encounters with UFOs.”

Kirstie discovered a range of articles covering the newspapers’ circulation areas from Dundee up to the Highlands which “provided lots of information”.

She added: “I thought an interactive map would be an interesting way of bringing the story to life and adding an extra dimension to a historic piece.

“I corroborated my research with declassified MoD files held by the National Archives and approached the DC Thomson data team to see if it was possible to take a list of sightings from our circulation area between 1997 and 2009 and turn it into a map.

“Joely took my rough idea and produced a fantastic and interesting resource, with lots of information to enhance the story.”

Added Joely: “Part of our mission on the data team is to ‘democratise’ open data, i.e. to make it accessible and useful when it might otherwise be buried away and overwhelming for individuals to make sense of.

“The ‘UFO sightings desk’ files (though on the light-hearted side) are a good example of this, with nearly 3,000 reports spanning the whole of the UK in numerous PDF documents.

“Kirstie’s idea was to make this interesting and relevant to our local readers. From my end this involved converting the documents into a spreadsheet, zoning in on sightings from our reporting areas, and plotting them onto an interactive map that can be explored, including details of each sighting with nice graphics.

“This brings the stories to life in a way which is hopefully fun and engaging to the audience, who can explore their local area on the map and sparks conversations on social media where people are able to swap their own UFO tales.”

The data team was launched as part of a wider newsroom transformation within DC Thomson.

It is headed up by data content lead Lesley-Anne Kelly, as well as Joely and fellow data content specialist Emma Morrice.

Lesley-Anne said: “The UFO map is a great example of a collaboration between the data team and specialist reporters and shows how data can be used for fun stories.

“Data journalism is often seen as only for serious subjects – and whilst serious subjects are important and we cover them in depth (for example our pieces on suicide statistics and data showing the vaccination poverty gap across the country), we also strive to show that data journalism doesn’t have to be serious.”