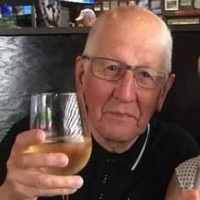 A “perfectionist” photographer who worked on his hometown newspaper has died aged 78.

Tributes have been paid to Bernard Hales, pictured, who worked for the Northamptonshire Evening Telegraph.

Bernard had initially trained as a typesetter but switched to photography, described as his “first love”, once he had qualified.

He left the newspaper to set up his own printing business but later returned to the Kettering-based Telegraph on a freelance basis.

Former Telegraph colleague Kit Mallin told the newspaper: “He was a terrific photographer and a perfectionist when it came to taking pictures.

“He was so helpful and encouraged me, took me out on jobs and even gave me a camera.

“He was like a brother to me and a really good friend. I’m going to miss him terribly.”

Alan Castle, who was based at the Telegraph’s Wellingborough office, worked with Bernard in the late 1960s.

He told the paper: “Bernard started as a typesetter. We worked together for a couple of years but in different offices.

“He left because he wanted to run his own printing firm. We got to know each other better when he came back as a freelance in the late 1990s.

“He was always very helpful and jolly. He will be missed dearly.”

Bernard, who had suffered a short illness, is survived by wife Joan, son Aidan, daughter-in-law Andrea and grandson James.

He had met Joan while covering Kettering’s carnival, where she was carnival queen, for the Telegraph.

She said: “He was a really decent bloke. He proved that through his actions.

“He worked really hard up into his seventies.”

Bernard’s funeral will be held at the Catholic Church of Our Lady of Walsingham in Cottingham Road, Corby, at 11am on 14 January followed by a committal service at Kettering Crematorium.