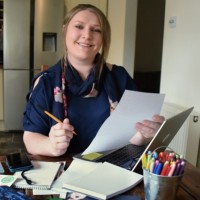 An obituary writer has publicly thanked the bereaved families she has spoken to since taking on a new role in regional journalism last year.

Eastern Daily Press community life correspondent Donna-Louise Bishop has opened up on the “honour” of writing obituaries for the newspaper after marking one year in her current post.

Obituary writing features as a “major part” of Donna-Louise’s job, and she says it sometimes feels as if her “presence alone is a bad omen”.

But she has now shared the positive elements of the job in an editorial for the Norwich-based EDP.

Donna-Louise, pictured, wrote: “It is a fact that death makes many of us uncomfortable – and I am not exempt from that – but I don’t view my role as focusing on the ultimate end.

“In fact, it has become something of an honour, a privilege even, to pay a lasting tribute to someone’s loved one.

“It has become almost a stereotype of obituary writers that we lurk in the valley of the shadow of death, constantly balancing the fragile nature of life.

“In reality, I have shared more laughs than tears with people as they unravel the remarkable and heart-warming stories of the person they knew.”

She wrote: “I don’t take this responsibility lightly though. As a former 999 call handler for the ambulance service, I know all too well how delicate the balance between life and death can be.

“But one thing is for sure, I never tire of writing about other people’s lives lived.

“So, as I celebrate my own milestone, I want to thank all of the bereaved who have reached out to me and trusted me to share their deceased’s stories, as well as the people who have allowed me to approach them and ask for the privilege to do so.”