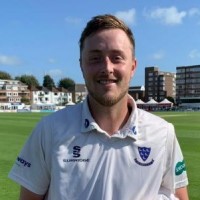 A regional news website has apologised after mistakenly using photographs of a cricketer in a story about offensive Twitter posts published by his namesake.

Kent Online has said sorry to Kent wicket-keeper Ollie Robinson over the use of his image in a story about the Sussex bowler of the same name.

Sussex’s Mr Robinson, pictured, made his debut for the England Test team on Wednesday, but had to issue an apology on the same day after racist and sexist posts he had made in 2012 surfaced online.

Kent’s Mr Robinson is five years younger than his namesake, although confusingly both players share a birthday of 1 December and were born in Kent.

Kent Online’s apology states: “Kent Online would like to issue a sincere apology to Kent cricketer Ollie Robinson following the publication of an article on Wednesday, June 2.

“Pictures of Mr Robinson were mistakenly used in a story about Sussex cricketer Ollie Robinson who, following his England debut, had apologised for offensive social media posts made several years earlier.

“We would like to reiterate that Kent player Ollie Robinson is not related to this story in any way and has never shared such content on social media.

“An investigation is underway to establish how this error occurred.

“We very much regret any distress this has caused Mr Robinson and his family.”