A new editor has vowed to focus on “exclusive content” after introducing a fresh tagline at a city daily.

Richard Porritt has stamped his mark on the Norwich Evening News by bringing in the tagline ‘Our City, Your Paper’ on its front page.

He took over at the Evening News last week following an Archant restructure which has also seen Natalie Sadler become editor of the Norwich Evening News.

Richard and Natalie have become their respective titles’ first dedicated editors in four years as a result of the change. 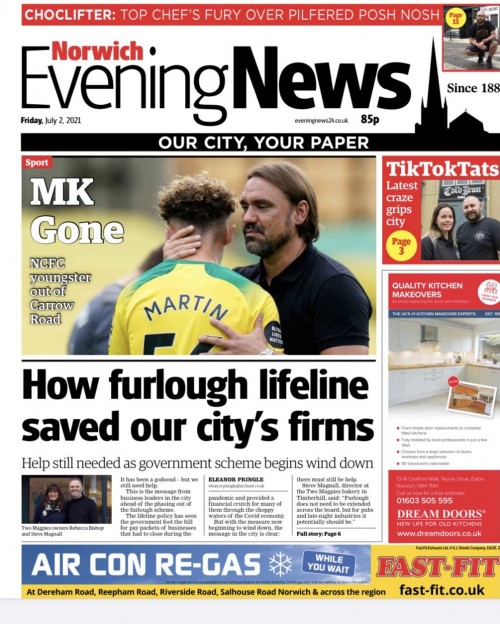 The new ‘Our City, Your Paper’ tagline first appeared on Friday’s front page

In an editorial introducing himself to readers, Richard wrote: “Taking over the editorship of this city’s newspaper is a dream come true. I will not let you down.

“My team and I will fight tirelessly to uncover wrongdoing. We will fight for you and this city. And we will speak truth to power.”

Going on to reveal there will be “some changes” to the NEN in Thursdya’s editorial, he added: “I am determined to drive exclusive content in print and online – stories you won’t read anywhere else.

“And tomorrow the first of our new columnists appears in the paper. your paper is giving our city a voice.

“This is just the beginning. We won’t always get it right – and when we don’t I want you to tell me.

“But we will always give our all for our readers.”

Natalie has vowed to do more to “celebrate” Ipswich in her own debut editorial.

She wrote in the Star: “Every town has its challenges, and we won’t shy away from those, but Ipswich too often seems to be in the shadows of near neighbours like Bury St Edmunds, Colchester and Norwich.

“That’s simply not right. We have much to be proud of here and we should shout about it – with confidence.”

Natalie also pledged to “ensure those charged with protecting and rejuvenating our town are held to account”.

She wrote: “We need to fight for every young person in Ipswich to have access to first class education, to ensure they plug the gap in their learning created during lockdown.

“Making sure they all have the technological devices they need for their learning through our IT kit for Kids campaign was just the first step in this.

“Ipswich is a town I have known and loved my whole life.

“I joined Archant Suffolk back in 2010 as a reporter – fulfilling a long-held ambition to work for the titles I had grown up with. I later worked across both the EADT and Ipswich Star as digital editor before returning from maternity leave three years ago as Head of News.”

“It gives me great pride to be at the helm of your title – the first woman to ever hold the role – representing everyone in the town.”