May backs bid to keep public notices in regional newspapers 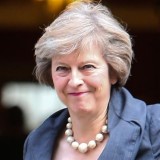 Theresa May has called for public notices to stay in the regional press in an interview with her local newspaper.

The former Prime Minister has backed the News Media Association after it warned plans to further digitise the planning process could be a “hammer blow” to local journalism if it comes at the expense of printed newspapers.

The Tory MP for Maidenhead spoke out in favour of the NMA’s campaign to save the practice in an interview with the Maidenhead Advertiser.

Advertiser owner Baylis Media is currently publishing weekly stories in print and online to highlight to readers the developments appearing in its titles’ public notices.

Mrs May told the paper: “I have in the past raised this as an issue and I think it’s important.

“I know the Advertiser has changed the way it presents some of these local issues so it’s more obviously for people what the issues are and people can see them more easily which is a good thing.

“In terms of notifications I think it’s important the requirement continues for public notices to be put in local newspapers.”