Editors and journalists have accused senior Conservatives of treating the regional press “with disdain” after a “cancelled” visit by Priti Patel went ahead as planned just over an hour later.

A number of regional titles in Peterborough and Cambridgeshire were told a cabinet minister, later discovered to be the Home Secretary, would be visiting the city yesterday – only to receive word 90 minutes before scheduled interviews were due to take place that the visit had been cancelled.

But later yesterday morning James Palmer, Tory candidate in the Cambridgeshire and Peterborough mayoral election, posted photographs of himself and Darryl Preston, the party’s police and crime commissioner candidate for the same area, in the city with Ms Patel.

Mr Preston’s office had originally informed the regional press of the visit’s apparent cancellation and later apologised, claiming the email to journalists had been sent “in error”. 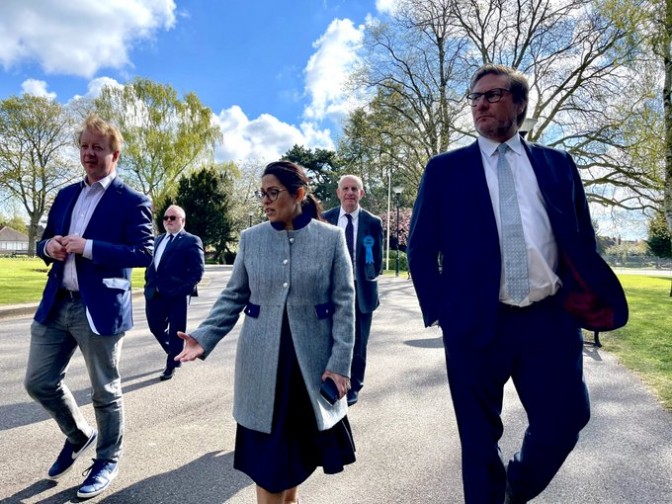 Priti Patel during her visit to Peterborough yesterday

But Cambs Times editor John Elworthy, Peterborough Telegraph reporter Joel Lamy and Reach plc democracy editor Yakub Qureshi have all spoken out about the incident – with John describing the party’s actions as “totally unnecessary and disrespectful”.

Speaking to HTFP, John said: “Having been invited to meet a cabinet minister (not told which one) but then discovering it was Priti Patel we had planned coverage. I was surprised to receive an email earlier today at 7.51am from Darryl Preston’s PR telling me that ‘unfortunately’ the visit of a cabinet minister had been cancelled.

“My initial thought? Crisis in Downing Street. Boris re-decorating row? But you can imagine the surprise to see the Tory candidate for metro mayor James Palmer tweeting a photo of how ‘great’ it was to be with Priti Patel on her visit to Peterborough. I think my answer was ‘not best pleased’.

“I recognise Priti Patel has some challenging issues in Peterborough (anti-Semitism a hot topic locally) and ironically it was the day she was being challenged by The Police Federation to meet with her to discuss victim sentencing after a man who attacked and seriously injured a police officer was jailed for just 20 months.

“But again, the regional press is being treated badly and with disdain by senior Conservative politicians. Not the first time, probably not the last.”

“But to then have Tory candidates grinning like Cheshire cats and walking through a Peterborough park with her in tow is an insult to my intelligence, that of our readers, and totally unnecessary and disrespectful.”

He wrote: “I was told last night that the visit had been cancelled. Clearly that wasn’t the case. It’s a shame as I’d have liked Priti Patel’s views on a range of issues.”

Yakub added: “Media told the Priti Patel walkabout had been cancelled… it went ahead anyway.

“It’s almost as if nobody wanted any awkward questions about Number 10 renovation work.”

The Conservative Party failed to respond to repeated requests for a comment on the incident by the Telegraph, but a spokesman for Mr Preston told the newspaper after the visit: “We sent an email early this morning saying that the minister’s visit was cancelled. This was an error.

“The minister’s plans had changed and she was no longer available for interviews in Cathedral Square.

“We apologise for this and any confusion it may have caused.”