A journalist is set to publish his debut novel based on a historical story he covered for a local newspaper.

Mike Lewis has written ‘If God Will Spare My Life…’, based on the story of William James, who served at the Battle of the Little Bighorn, also known as Custer’s Last Stand.

Mike learnt of James while working at the County Echo in Fishguard.

The Pembrokeshire farmer’s son had emigrated to the USA in 1871 and enlisted in the US Seventh Cavalry under Lieut-Col George Armstrong Custer. 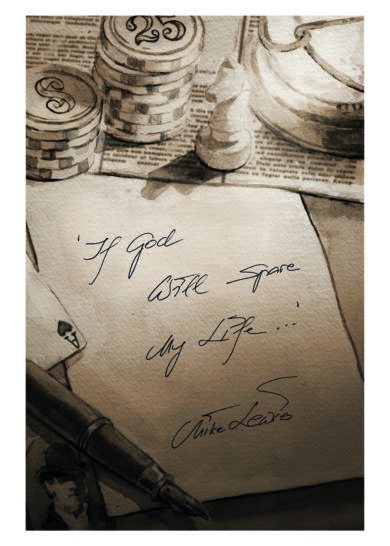 He subsequently fought at the Battle of the Little Bighorn, when 210 soldiers were massacred by thousands of native Americans on 25 June 1876.

Mike told HTFP: “I first learnt of James when BBC Wales ran a piece on him in 2002. I then did a follow-up article after managing to locate living relatives.

“Back in Pembrokeshire a few years later I found myself driving past James’s old childhood home in Dinas Cross every day – it got me thinking what kind of person was he and why swap west Wales farming life to serve as a frontier soldier?

“I subsequently stumbled across a batch of letters James had dispatched home to his younger brother – I had hoped to also find a photo of the guy himself, but although he sent one home I have not yet managed to locate it.”

The forgotten letters form the framework of ‘If God Will Spare My Life…’ which is to be published by Staffordshire-based Victorina Press in June.

A work of fiction, it is based on true events and real people.

Mike, 60, added: “The actual writing only took a few months. Having never previously tackled fiction I found it a unique, if occasionally unsettling experience.

“It took me off in wild directions I hadn’t planned. At one point I was bashing out 2,000 words a day.

“It may sound bonkers but it was almost as if someone was standing alongside me dictating what I wrote.”

Mike’s Fleet Street career included working as a sports journalist for both The Guardian and Daily Telegraph in the 1990s.

He quit London to return home and raise a family, subsequently serving as editor of the South Wales Guardian in Ammanford and, latterly, as a reporter for the Cambrian News in Aberystwyth.

The book is available on pre-order here.