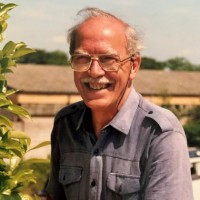 A journalist who went from his hometown daily to the nationals has died aged 91.

Tributes have been paid to Don Hardisty, who began his career as a trainee journalist on the Yorkshire Evening Press, now York daily The Press.

Don, pictured, also worked at Sheffield daily The Star and the North Wales Chronicle during his career.

After beginning his career on The Press, Don moved to Sheffield in 1951 as a news reporter, before becoming a sports sub on the Daily Mail, in Manchester, in 1953.

He later moved to sports writing full-time and became part of a “lively and highly talented community” of Manchester-based reporters.

An obituary in The Press states: “[The community] suffered a tragic loss in the Manchester United air crash at Munich in February 1958 in which eight writers died with players and officials of the club.

“Don would have been on this trip but for a change of editorship at the Mail which saw Eric Thompson restored as chief Northern sports writer. Eric was among those who died.”

Don later moved to Wales after the break-up of his first marriage, where he continued to freelance for the Sunday Express while running a guest house with Christine, who would become his second wife.

He later returned to journalism with the North Wales Chronicle after editor and friend Ray Bower offered him a job as a news reporter and “extremely casual” sports editor.

In 1974 he moved back to full-time work on the nationals, with the Express and the Daily Star, before taking redundancy in 1988, when he became a freelance again.

Don was in hospital after suffering breathing difficulties at home in Handforth, Cheshire, when he contracted an infection, not believed to be coronavirus.

His wife and children were able to be with him during his last hours.