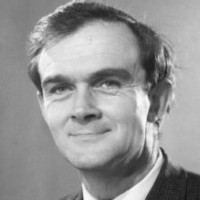 The journalist who broke news of the North Sea oil boom to the world has died aged 91.

Tributes have been paid to Edward ‘Ted’ Strachan, who served as chief industrial correspondent at Aberdeen daily the Press & Journal.

Ted, pictured, had covered industry for the P&J from 1964 onwards and landed the scoop when an oilfield was discovered in the North Sea on 28 April 1970.

His coverage of the boom subsequently gained him a fellowship at the Institute of Petroleum in 1972.

Ted began his career as a sports reporter on his hometown weekly the Elgin Courant before joining the P&J and Evening Express at their district offices in Elgin and Inverness from 1953 until 1955.

He moved to head office, in Aberdeen, in 1960 and then spent time as a features writer before moving to cover industry.

“He had an amazing list of contacts, particularly in the oil industry, all over the world.

“He had a great sense of humour, particularly when recalling the Moray mafia of reporters who, at one time, ruled the roost in the Aberdeen newsroom.”

Ted left the newspaper in 1975 to become UK editor of Noroil, an oil magazine based in Stavanger, Norway.

In the early 1980s he left Noroil to form his own company, Aberdeen Petroleum Publishing, and finally retired around 15 years ago.

Ted died peacefully at home with wife Dorothy by his side.

He is also survived by son Boyd, daughter-in-law Slavomira and grandson Mark.