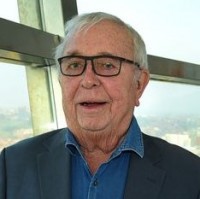 A journalist who left “an indelible legacy” in the city he served has died aged 87.

Terry, pictured, worked as a journalist for the Sunday Express and Granada TV before launching Mercury in the early 1970s.

He went on to found Radio City in 1974 and was the station’s managing director for 17 years.

A spokesperson for Liverpool Press Club told the Liverpool Echo: “Terry has been immersed in the city and the media for a lifetime.

“As principal of Mercury Press Agency and later founder of Radio City he nurtured scores of talented reporters, sports writers and photographers who have become huge names across the media landscape.

“He has left an indelible legacy.”

A supporter of Liverpool Football Club, he also achieved a lifetime ambition by serving on the club’s board between 1990 and 2015.

In a statement, the club said: “Liverpool FC is deeply saddened by the passing of former director Terry Smith, aged 87.

“The thoughts of everyone at Liverpool FC are with Terry’s family and friends at this sad time. Rest in peace, Terry Smith.”

Terry, who lived in Hoylake with Pamela, his wife of 37 years, had two sons and a stepdaughter.

He died in the early hours of Sunday morning.