Journalist who combined politics and football says farewell after 47 years 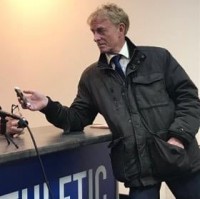 A regional journalist who began his career in the local press has said farewell to the industry after 47 years.

Paul Rowley has left journalism after serving as a political correspondent, while also covering Wigan Athletic football matches home for many years for BBC Radio Manchester.

Paul, pictured, said he was “destined to be a journalist” after writing to the Wigan Observer’s Cousin Rosemary column when he was just seven-years-old.

His first job was with the Southport Visiter at the age of 19 in 1974.

He later moved to Liverpool’s Radio City and Granada television, before moving to IRN as political correspondent in 1987.

Paul switched to the BBC in 1994 as the national political correspondent for its local radio network.

He had covered Athletic matches since 2005.

Paul told the Wigan Post: “At the minute I’m spending all my time replying to people who have sent lovely messages to me.”