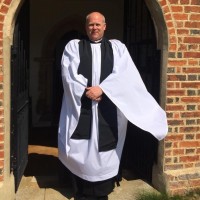 A journalist ordained as a priest last year has penned his final column after 15 years with a regional publisher.

James Marston, who was ordained as a Church of England priest in September 2020, has ended his decade-and-a-half association with Archant after his regular column came to an end.

James, pictured, worked in various roles at Archant’s daily titles in Norwich and Ipswich including education, entertainments and features.

He said goodbye in a farewell column for the Eastern Daily Press, writing that being a journalist was a job he had “loved for so long”.

Of his new vocation, he added: “I still often feel unworthy of this calling. I still often let ego get in the way, I swear too much, I still like a cigarette, and am far too selfish, I have faults as we all do, but through this long and sometimes difficult process of becoming myself change has been the only constant, with the exception of my faith.

“To be a priest is many things – not least to be selfless and vulnerable and by doing so to point others towards trusting in God in their lives – no easy task in a world where we habitually eschew the need for the spiritual, dismiss with ease the religious, and worship instead self and materialism.

“Today’s subject might all sound somewhat esoteric but I think we are all spiritual beings, all influenced by the metaphysical and we are all, in the end, God’s creatures – indeed we are interconnected and intertwined by love and God’s grace far more than we are by aeroplane travel or football or having a mortgage, we just don’t often recognise it, largely I think, because belief in God challenges us to change.

“Yet to begin see the world in this way removes much of the fear we all experience. To have a faith means to negate fear and live in hope. It is this faith I hope to keep and, maybe even pass on, as I continue my journey.”

James went on to write he hoped to “become yet more fully the priest I sense and hope I am becoming”.

He added: “I thank you all for reading, for your support, questions, agreements, disagreements, and engagement with me over all these years.”