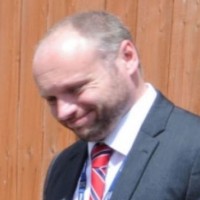 A judge has told Will Green that “all sentencing options” will be available after the former Hexham Courant journalist pleaded guilty to a single charge of making 79 Category C still indecent images of children.

Green, pictured, worked at the Courant “for a short period of time” before leaving in 2008 to work in the Northumbria Police press office.

The 42-year-old was suspended from his most recent role as head of corporate communications at Cleveland Police when he was arrested on 12 January this year and later resigned.

Ian Martin, prosecuting, told Teesside Magistrates’ Court on Friday: “Cleveland Police were made aware by the National Crime Agency of indecent images being uploaded at a house in Wynyard.”

Green, of Hexham, was released on bail while a pre-sentence report is compiled and will return to the same court to be sentenced on 24 August.

Deputy District Judge Tom Moran told Green he would be subject to notification requirements following his guilty plea, adding that “all sentencing options” would be available following the pre-sentence report.

Speaking after the hearing, Superintendent Paul Waugh from the Cleveland Police directorate of standards and ethics, told the Northern Echo: “Whilst the offences are not linked to his role, he was in a trusted position in policing, communicating about the core values that he did not uphold.

“He has let his colleagues, partner agencies and local communities down.”