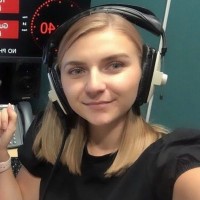 A journalist has hit out at inaction on rape-related insults and other sexual threats she has received – which remain online despite being reported weeks ago.

Natalie Higgins has spoken out after being abused for sharing a video on Twitter raising awareness of the safety concerns faced by women, which led to her receiving comments including “she’s too ugly to get raped” and “I think you’ll be OK” from anonymous accounts on the social media site.

Natalie, the Harrogate and Yorkshire Dales reporter for Bauer Media’s Greatest Hits Radio, has since opened up on other misogynistic abuse she has received in recent times – but says many of the offensive comments have not been deleted despite being reported to Twitter last month.

The 23-year-old, who studied for her NCTJ qualifications at the University of Sheffield, said she felt “sick” reading some of the responses to her posts on Twitter.

Speaking to Yorkshire Live, Natalie, pictured, said: “It made me feel sick that someone would think that it’s okay to say that.

“I don’t know if that comment was directed at me or the person in the video but either way it’s disgusting.”

She added: “If my parents saw this, they’d be heartbroken.”

Natalie said: “One comment I got on Twitter was ‘looking at your pictures, you seem like a nice person and the type of person you want to take out to dinner but then I read your tweet and if I was to f*** you, I’d do it with a gag in your mouth so I couldn’t hear what you were saying.

“Where does that come from and why does someone think that that’s okay?”

She added: “Everyone’s got different opinions but just because [journalists] are conveying the message, we are the ones getting attacked for it.

“Fair enough if you don’t agree with a story or the person that’s been interviewed but the comments are always specific to the person who wrote the article rather than what’s being said in it.

“I find it hard to bite my tongue but at the same time if you don’t say anything it’s as if you’re just sitting back and letting it happen.”

Natalie has not reported the abuse to police, but Twitter was made aware of it last month – just days after a string of new measures aimed at tackling the abuse and harassment of journalists were revealed by the UK Government.

She told HTFP: “There hasn’t been any involvement from police, mainly because the accounts are bots or from nowhere near me. I wouldn’t even know where to start with reporting to police.

“Most comments are still there despite being reported. I’ve noticed one account has deleted their reply, as well as all other replies I saw they’d sent to a number of profiles over a period of time. They probably got scared off.

“I’ve had a meeting with work to discuss how I am but until the comments stop, which they won’t, there’s nothing else I can do except ignore them.”