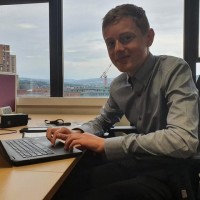 A new journalist has shared his hopes for the future after opening up on his first week at a regional daily.

Alex Wilkinson has written about his first week at work on Sheffield daily The Star in a first-person piece for the newspaper.

Star owner JPIMedia revealed in June it was set to take on 13 new apprentice journalists across the country.

Candidates aged between 18 and 24 were sought in a recruitment drive by the publisher.

Sheffield native Alex, pictured, first became interested in the industry after undertaking a journalism challenge while a Year Seven pupil at school.

In his piece, he wrote: “Now I have been given the opportunity to work as a journalist with an apprenticeship at The Star, it’s become an even more exciting prospect for me.

“Experiencing journalism in Sheffield is very exciting for me due to the fact it is the city I was born in and have lived my whole life, and so I have a strong knowledge about the city.”

“From working just one week in a journalistic environment, I have learned so much about what I can expect from a career in journalism.

“Working closely with other journalists has helped me learn new skills and attributes, such as what a genuine interview looks like and how to create articles to be published.”

Alex went on to discuss new skills he has learnt, including story-gathering and note-taking.

He wrote: “I’m now really excited for the future in learning more and progressing my skills. With my college course now beginning, I hope I will keep learning and improving my skills so that I can apply them into my job.”