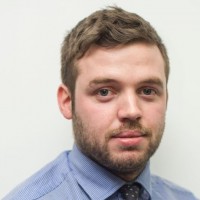 A regional daily journalist was invited to take his first coronavirus vaccine early – because the NHS believed he was six centimetres tall.

Liam, pictured, was surprised to receive a text message inviting him to get his first inoculation, but decided to book his slot due to being “under the impression that when offered a vaccine you should always accept”.

He later decided to ring his GP to check whether there had been a mistake but was told he had been placed into Group Six of the priority list because of his weight.

In a piece for the Echo about the mix-up, Liam wrote: “But the call had obviously got some questions being asked locally and the next morning I received a call back from my GP surgery. What followed was one of the more bizarre phone calls of my life.

“A nervous sounding chap on the line began quietly explaining to me that there had been a mix-up in offering me a vaccine at this stage. He said unfortunately my details had been put into the system incorrectly when I had registered with the GP just a year ago.

“He was really polite and very apologetic but said I was in fact not due to get my vaccine anytime soon. To be honest I was quite relieved as had felt strange about being invited ahead of so many other more vulnerable people.

“But obviously I had to know more about the mix-up that had led to this moment.

“The man from the surgery took a sharp intake of breath and tried to remain composed as he informed me that rather than having my height registered as six foot two, it had been put into the system as 6.2 centimetres.

“I’m not sure how he kept it together when he told me that this, combined with my weight, had given me a Body Mass Index of 28,000.”

A BMI of 40 or more is considered morbidly obese.

Liam added: “The man’s nervous tone cracked into a laugh when I joked about putting on weight and losing a significant amount of height during the lockdown.

“If I had been less stunned, I would have asked why no one was more concerned that a man of these remarkable dimensions was slithering around south Liverpool.

“But he was very apologetic and really nice and I think he was just relieved that I found it so funny.”

Liam contacted the local Clinical Commissioning Group “like the diligent, tiny, morbidly obese journalist that I am” for a comment.

Dr Fiona Lemmens, chair of Liverpool CCG, told the Echo: “I can see the funny side of this story but also recognise there is an important issue for us to address.

“There are millions of GP appointments taking place every day and while we take care to make sure records are accurate occasional data errors do occur.”

“We are grateful to Liam for his honesty and for alerting his GP practice when he received his vaccination invitation.

“We would encourage anyone who has received a text invitation that they think they are not eligible for at this stage, to contact their GP practice to clarify. This will help ensure that more vulnerable people get vaccinated first.”