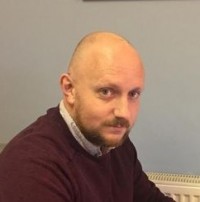 A regional journalist has fulfilled a lifelong dream by writing a book about his favourite footballer.

David Broome, who works for Stoke-on-Trent saily The Sentinel, has written the book about Brazilian player Juninho’s time with Middlesbrough FC, the club he supports.

David, pictured, first started planning the book, entitled ‘The Little Fella: How Middlesbrough fell in love with Juninho’ 10 years ago after meeting the player at his testimonial match.

He interviewed the likes of Fabrizio Ravanelli, Emerson, Bryan Robson and Steve McLaren for the project.

David told The Sentinel: “In simple terms, I wrote the book about Juninho because he’s my favourite player of all time.

“But for me, what was most interesting was his relationship with Middlesbrough Football Club.

“Even now, he’s still held in such high regard by the fans.”