A journalism trainer who believes he contracted coronavirus at the Euro 2020 final has called for the UK Government to make its infection data on the event public.

Supporters were required to prove they were not infectious in order to gain entry to Wembley Stadium for the match, but a number of ticketless England fans stormed the entrances before kick-off. 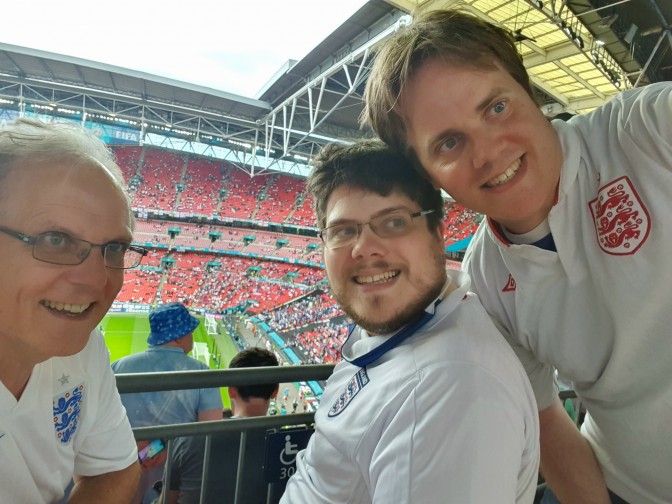 Graham, left, with his sons Tim and Martin at Wembley

They also took Tim’s friend Joe McIndoe, 29, who is also in a wheelchair.

Speaking to the i, Graham said: “It has to be Wembley, we haven’t been anywhere since.

“All of us have been fanatically careful the last 16 months, with hand sanitiser and masks and only going out when you have to. I suppose you let your guard down because it’s the final, but also you’re told it’s a test event.

“Maybe if it had been an ordinary event it would have been safe, but there were hundreds, probably thousands, that climbed over barriers who went in without any Covid checks at all.

“Not that they were necessarily that stringent, we just showed a QR code on our phone (for the Covid check), it could have been a Nando’s reservation I think they would have waved us through.

“In a way it was a perfect storm. I would say it probably was a super-spreader event.”

Graham, a former football reporter at the Southern Daily Echo, said he and Tim started to feel ill the Tuesday after the match and tested positive on Wednesday.

Martin only suffered mild symptoms the following Saturday and tested positive then.

Calling on the Government to release any data they have on Wembley infection numbers, Graham added: “Absolutely they should.

“They say it is a test or pilot event then surely they need to release the results and learn the lessons from it.”