Hundreds of young people have found jobs thanks to an employment drive backed by a regional daily.

Portsmouth daily The News has revealed 265 young people have been offered employment thanks to the ‘100 in 100′ campaign.

The drive, backed by The News in partnership with not-for-profit company Shaping Portsmouth, aimed to create a total of 100 roles in 100 days.

But that target was smashed by the deadline, prompting the below splash by the newspaper earlier this month. 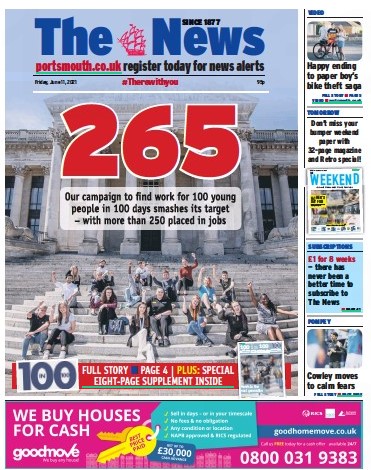 Stef Nienaltowski, chief executive officer of Shaping Portsmouth, told The News: “When we came up with the idea for this project back in March we couldn’t have dreamt of the kind of response we have received.

“We were wowed when the project met its target halfway through, we’re humbled now that it’s smashed through the second target we set.

“Thank you to everyone that has worked so tirelessly to give our young people the future they deserve.