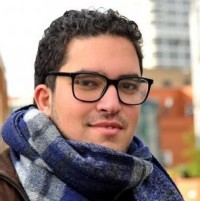 A regional journalist is set to spend his second consecutive Christmas alone and away from his family in France due to coronavirus.

Reach plc’s Hedi Mehrez has opened up on his feelings of “loneliness” at the prospect of spending another festive period in the United Kingdom.

French native Hedi, pictured, was also forced to stay away from his family last year while working for the Swindon Advertiser.

In a first-person piece published on Monday, Hedi wrote: “As the UK hit a record 88,736 coronavirus cases on Thursday, and with France tightening its travel restrictions for those coming from Britain, I’ve made the difficult decision to stay in London for Christmas and New Year.

“Going back home and spending some quality time with my loved ones has now turned into a distant dream due to this new wave of cases. I originally planned to visit them at the end of next week.

“I got my booster jab a few weeks ago, and kept my hopes up until December 16 when France announced that more tests will need to be done with all arrivals having to isolate for at least two days.”

Hedi went on to note that, as a French citizen, he is still allowed to travel to my home country without an “essential reason”.

He added: “But at what cost? My father has been diagnosed with cancer recently and I have not been able to see him yet but I am not taking the risk of infecting him with Covid, and with Omicron on the rise this is more than likely.

“He had surgery to remove the tumour and he now has to endure treatment.

“And on a financial level, PCR tests in both countries can be relatively pricey, so I would rather save my money and protect my family until the situation calms down.

“I travelled to Paris last October for the first time in more than a year and paid nearly £100 in tests.

“Coming from a Muslim family, we do not celebrate Christmas, but we always loved gathering around a nice dinner. I miss that.

“This is now the second year in a row that I am having to stay in the UK for the holidays. Most of my friends living in the UK will be staying with their families, adding to this feeling of loneliness.”

Hedi concluded: “Let’s hope that next year will be better and less stressful.”