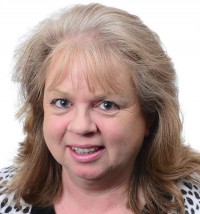 A former news editor has opened up on the death of her daughter after her suicide aged 28.

Lucy Millard, who worked on the Newark Advertiser for 40 years, has spoken out about mental health after her daughter Bethan took her own life just weeks before her 29th birthday.

Bethan, who had been suffering from anxiety and depression for 10 years, killed herself on 30 April – only five days before the birth of her niece.

Lucy, pictured, has now written a piece for the Advertiser to mark Mental Health Awareness Week, which was last week, “in the hope that nobody has to experience what my family is going through”.

In the piece, she wrote: “My daughter would have been 29 next month. But instead of thinking of birthday celebrations I am planning her funeral.

“Bethan had been suffering from anxiety and depression for ten years. She had an experience at university that I believe she never recovered from.

“In the early days she received counselling. She wasn’t better but she seemed to be managing.

“She loved her job as a receptionist at The Barcode Warehouse in Newark. She always liked to look nice and would put on her high heels, even though she was on her feet all day. She just wanted her life to be normal.”

Lucy went on to reveal how her daughter’s mental health “took another turn” when she was diagnosed with Crohn’s disease, which led to other medical problems.

She added: “Bethan couldn’t understand why she felt so bad. She used to describe it as having a dread that would not go away. She was existing on three hours’ sleep because the dread was worse at night.

“Bethan killed herself on April 30. She never saw her niece who was born five days later, bringing some sunshine into our lives.

“The baby will be among family and friends at the funeral next month and we will tell her about Bethan when she is older.

“Bethan may be gone but she will always be loved and she will never be forgotten.”

Speaking to the Advertiser, Lucy explained why she decided to write the piece.

She said: “Writing an article about my daughter’s death was never going to be easy but, when I saw it was Mental Health Awareness Week, I felt it was the right time.

“I would like to think I have written it in the hope that nobody has to experience what my family is going through.

“If I am honest, I have probably written it because in a small way it has helped me.”