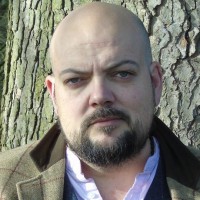 A former “hard-drinking news journalist” has opened up on living with severe mental illness in a new book.

Dave Mark, who worked as a crime reporter for the Grimsby Telegraph, has spoken out about his depression, OCD, anxiety, mania and addiction in a bid to help others going through similar struggles.

Dave, pictured, has suffered from mental health issues since his early teens and has now written a memoir called Piece of Mind, which documents his battle over the years.

A former alcohol addict who is now sober, he has gone on to become a best-selling crime author since leaving journalism.

Speaking to his old newspaper, Dave said: “I’ve had mental health problems since I was in my early teens.

“The life of the hard-drinking news journalist felt like the right path for somebody who felt cynical and broken most of the time. Same with becoming a novelist.

“I always felt that if I became a bestseller then I would feel like I was worth something – that all my pain and suffering had some kind of meaning. All it did was make me feel more of a fraud.

“I’ve had to get sober, get well and find a reality where I have the space to breathe before I could reach a place where I felt able to really work out what I think and what I feel and what I want. Working all that out has been a big part of writing this book, and vice versa.”

Dave went on to describe his condition as the “ugly kind of depression”.

He added: “There’s nothing romantic about what goes on in my head. Sometimes I’m obnoxious and self-centred and I don’t know whether that’s my illness or me or a combination of the two.

“I don’t even know whether there would be a ‘me’ if my illnesses were taken away.”

He hopes the new book will aim to give people a greater understanding of mental illness and to help those who are struggling.

Dave told the Telegraph: “I’d love for it to make some small contribution towards people being a bit gentler to one another: an increased awareness and empathy.

“I wish there was an easy fix to all this. I wish I could tell people that counting backwards from ten and wearing your shoes on the wrong feet would break the cycle of negative thinking.

“In truth, all I can really advise is to remember the last time you felt really flat, and then think of something halfway positive that has happened since then.

“If you’d given in to the dark thoughts, you’d have missed out on all that. Depression is like the weather – the black clouds just roll in from nowhere. But the sun always comes out in the end.”