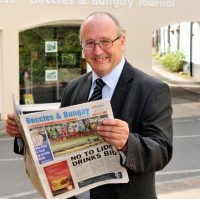 A former weekly newspaper editor has died aged 68 after an eight-year battle with leukaemia.

Tributes have been paid to David Lennard, who edited the Beccles and Bungay Journal until his retirement in 2015.

David, pictured, also served as chief reporter at the East Anglian Daily Times during a 40-year career with Archant and its forerunner Eastern Counties Newspapers.

He worked for titles including the Eastern Daily Press and Lowestoft Journal in a variety of roles too.

Nigel Pickover, who was editor when David worked at the EDP, told the EADT: “Dave was a wonderful journalist, and a warm and gentle human being, a rare combination in the increasingly-pressurised world of newspapers.

“In his roles across East Anglia, one common denominator stands out – how much each of the communities he served loved him.

“I was honoured to work with him in a couple of his roles and he always delivered the stories that mattered.”

David joined the Ipswich-based EADT when he was 15 to train as a compositor.

In the mid-1980s as new technology started to change the way newspapers were produced, he retrained as a journalist.

In 1987 he and his family moved to Halesworth where he was the EADT’s chief reporter before moving to the Norwich-based EDP’s office in Lowestoft, eventually becoming editor and chief reporter of the Beccles and Bungay Journal.

His friend and former Lowestoft Journal editor Russell Cook said: “Dave was chief reporter at The Lowestoft Journal with me when I was editing the title between 2002 and 2009 but we went back a long way to when we were teenagers.

“He and I were apprentices together working on the composing room floor in the print department of the East Anglian Daily Times and Evening Star in Lower Brook Street during the late 1960s before we both retrained as journalists in the 1980s.

“He was so dedicated and reliable and I regarded him as a real close friend.”

Angie told the EADT: “He was always very gentle with people, particularly when he had to talk to them after a tragedy. He was very well thought of in Halesworth.

“He had leukaemia for almost eight years. He was very ill these past few months and was very determined to stay at home, but he fought until the end.

“My mum took on his care with a dedication and tenderness that was remarkable and awe-inspiring, and just reflected their strong and loving marriage.

“We will miss him immensely but know he is at peace now. He was very well cared for by the Norfolk & Norwich hospital over many years, and especially during Covid.

“He had to shield during the pandemic which was hard for all of us. The district nurses from Halesworth surgery also allowed him to die his way, privately and with dignity.”