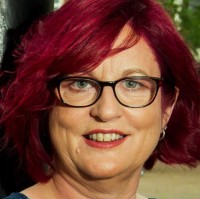 A former regional daily news editor who was still recently working as a freelance journalist has died of cancer aged 65.

Tributes have been paid to Sue Crawford, who used to run the newsdesks at both the Carlisle News & Star and the Cumberland News during a career that spanned more than 40 years.

Sue, pictured, took voluntary redundancy in 2017 but continued to work as a freelance writer and editor, setting up Sue Crawford Media.

Her work included contributing many articles to the titles’ sister business magazine In-Cumbria.

Sue’s husband Phil Taylor, also a former CN Newspapers journalist, and her only child, daughter Freya Whitfield, were at her bedside when she died in the early hours of Tuesday morning.

Phil, who described her as “simply irreplaceable”, told the News & Star: “Sue was a remarkable woman. She firstly battled back after being diagnosed with breast cancer in Easter 2014. She bravely recovered from that but then two-and-a-half years ago she was told that secondary cancer had returned in her liver and hip.

“She was only given a few months to live, especially when she then caught pneumonia and was hospitalised for two weeks, but with amazing courage and good spirit she defied the odds, right up until a month ago when she was firstly admitted to the Cumberland Infirmary after an internal bleed, and then the hospice.

“Her nickname at Reiver House where she was treated for both cancers was Lazarus because they were amazed by how she kept defying the odds and bouncing back.

“She never thought she’d ever get to see her second grandchild Toby, but she was with the rest of us back in April, celebrating his second birthday.”

He added: “I know she was very, very popular with so many people and she was an excellent, yet modest, journalist who was a fearless champion of the freedom of the press and how it was vital to stand up for the person in the street.

“And she was a brilliant mother, amazing grandma, my best friend and a wonderful wife.”

Sue was also a member and officer of the Carlisle Labour Party and for a time serving as a councillor for the party on Carlisle City council.

Former council Leader Colin Glover worked with Sue when she was a fellow councillor for the Currock ward.

He said: “Sue was incredibly respected in every aspect of her life.

“She was always determined to do her very best for people and what always shone through from Sue was that she cared about people, whether that was in her professional life or in her politics.

“She was a ward colleague in Currock and in that role she showed how much she wanted to make a positive difference to people’s lives.

“She was passionate about working for the local community and was chair of Currock Community Centre.

“People were what was most important to her. She had a very caring nature and did everything she possibly could to make a difference.”

Funeral details will be announced in the near future.