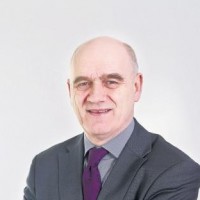 An ex-editor has hit out at social media companies over threats aimed at a former weekly newspaper colleague by anti-vaccination campaigners.

Denzil McDaniel, who edited the Impartial Reporter for 27 years, has called for more action to be taken over abuse sent to the paper’s former deputy editor Rodney Edwards.

Police in both Northern Ireland and the Republic of Ireland are investigating after Rodney was subjected to an “onslaught” of threats by anti-vaxxers.

The abuse came following an exclusive by Rodney for the Dublin-based Sunday Independent’s first Northern Ireland edition, in which he revealed he revealed the Police Service of Northern Ireland was investigating intimidating behaviour by anti-vaxxers towards politicians.

In his column for the Enniskillen-based Reporter, Denzil wrote: “For his courageous journalism in bringing such extremism into the public arena, Rodney has suffered much abuse on social media.”

Rodney himself has decribed the threats as “menacing” on Twitter, with one warning him he would neews “eyes in the back of [his] head”.

Denzil, pictured, added: “Quite rightly, police forces on both sides of the Border are now investigating, and the Chief Constable of the PSNI has taken a personal interest.”

“So he should; and indeed so should we all. We should also remember that social media is only a tool, it is being used by people.

“I often find it frustrating that many of the people who engage in confirmation bias and accept something unchecked and unregulated on social media sometimes are the first to criticise the mainstream media.

“There is an onus on social media companies to prevent this shocking, dangerous and unacceptable use of their communication vehicle in this way, and they are not doing enough.”

However, Denzil also went on to hit out at journalists “stoking division” on social media.

He wrote: “I’m ‘old school’ and remember when newspapers had a very distinct demarcation between news and opinion.

“But now those lines are blurred, and sometimes there are journalists who seem to think it is their function to promote an agenda, often using social media ironically, to do so.

“And the cult of the personality attention-seeking journalist, using social media to promote themselves is contrary to the purpose of their function

“Remember they’re very much a minority, so the media detractors shouldn’t tar all journalists with the one negative brush.

“Pluralism of media is vital, space and respect for all opinion is needed and public discourse needs to be cleaned up. The noise from the dangerous extremists must never become the norm.”