A former hyperlocal editor and local journalist known for his “positive and enthusiastic outlook” has died aged 53 after collapsing while out running.

Tributes have been paid to Tony Barker, the former editor of Petuaria Press, which covered the town of Brough, in the East Riding of Yorkshire.

Tony also worked as a journalist on Hull’s KCFM and Beverley FM during his career.

News of his death was featured on the front page of the Hull Daily Mail on Tuesday, pictured below. 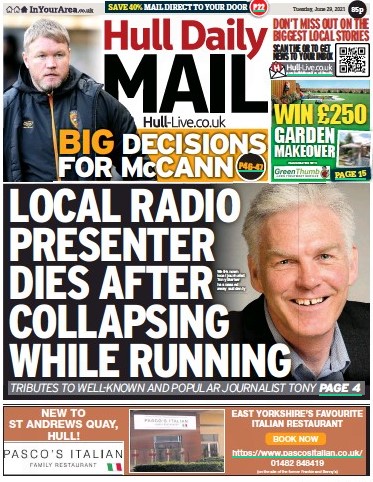 Tony launched Petuaria Press in 1999 and ran the publication until 2007.

In a statement, the Press said: “Tony was a keen runner and very community-minded. A committed advocate of local arts and culture, he continually strove to support local community initiatives.

“Tony always maintained a positive and enthusiastic outlook. His energy and passion was obvious to those around him.

“Tony was very much a people person and always had time to stop and chat – showing genuine interest in what those whom he met had to say.

Tony and his wife Julie had celebrated their silver wedding anniversary in March this year.

He died on 19 June and a celebration of his life will be held at the Beverley Barn on Monday 12 July at 1.30pm, followed by a private cremation.