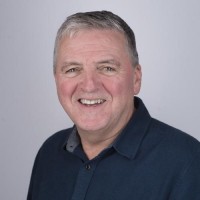 A former regional daily newsdesk boss has died aged 63 – days after his last column appeared in its sister newspaper.

Tributes have been paid to Ally McLaw, who served as news editor and assistant editor at the Glasgow Times.

Ally, pictured, had lived with a terminal lung and brain cancer diagnosis and wrote for The Herald on Sunday about his illness in a weekly column.

He drafted his last column from a hospital bed after being admitted during ongoing treatment, revealing in his final piece that he had tested positive for coronavirus.

Ally died in the early hours of last Friday morning, five days after the column was published.

Times editor John Scott told The Herald: “I had the privilege and joy of working with Ally when I was editor of the Evening Times and Ally was chief reporter and latterly news editor.

“I say ‘joy’ advisedly because Ally was such a lovely guy and always great fun to be with – someone I feel privileged to call a friend.

“He was a consummate journalist earning huge respect for his campaigning skills, including a series of award-winning campaigns and exposés, many with fellow investigative journalist Mike Hildrey – a chalk-and-cheese pairing that earned the nickname of the ‘Odd Couple’ in journalistic circles.”

Ally began his career on weekly newspaper titles in Ayrshire before moving to the Times.

He left the paper in 2000 to work in public rlations for NHS Lanarkshire, becoming director of corporate communications at NHS Greater Glasgow and Clyde two years later.

More recently, he set up his own firm, McLaws Consultancy, specialising in offering expert media advice to businesses and special causes.

Ally was diagnosed with lung cancer in 2019 and had an operation to remove a lung, but a follow-up scan detected the disease in his chest and blood cells. He also battled a major threat of septicemia and was seriously ill in hospital.

Donald Martin, editor of The Herald and The Herald on Sunday, said: “Ally was the consummate professional. He was a great journalist. He knew a story, how to find it, and how to write it.

“It was typical of him that even towards the end he was still trying to dictate his last few columns from his hospital bed. He will be sorely missed.”

Away from journalism, Ally personally raised almost £50,000 in the past few years for charities such as Clic Sargent and the Glasgow Children’s Hospital Charity among others.

Just weeks ago, he raised more than £4,000 for Macmillan Cancer Support with close friend Stuart Wilson as his surrogate runner in the Berlin Marathon.

Ally had been married to his second wife Laura since 2012. Ally had three children and Laura four children and between them, they had 11 grandchildren.