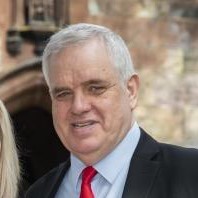 Eight thousand pounds have been raised for charity in memory of an editor who died after battling coronavirus.

The family of Kevin Hughes, who edited the Flintshire Chronicle and later became a local councillor, have presented a cheque to Wrexham Maelor Hospital.

Kevin’s sons Andy, Chris and raised the cash through a sponsored walk before and after their father’s death in January at the age of 63.

Last month Andy announced his intention to run for Flintshire County Council as an Independent candidate in the Gwernymynydd and Nercwys ward served by his dad, pictured.

He told North Wales daily The Leader: “We’re hoping that not many more families will have to go through what we have had to.

“I messaged my dad on 15 December to say that as he was on the mend I was going to do a 5k walk every day to raise money for the hospital until he was fit enough to walk with me.

“Sadly, that never happened but I carried on walking with my brothers until after our dad’s funeral on 22 January – it was to reward the fantastic team at the ICU at the Maelor Hospital.

“We simply can’t thank them enough for the support they gave him. They’ve been fantastic and tried every last thing.”

Kevin’s widow Sally added: “This is part of what Kevin would have wanted us to do.

“The staff at the Maelor Hospital did such a wonderful job and every time I spoke to Kevin he would talk about the fantastic job they were doing.”