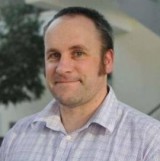 An editorial chief at a regional daily has been appointed to a new senior editor role with its publisher.

Neil Macdonald, pictured, has announced he is moving to a new job with Reach plc after 20 years at the Liverpool Post and Echo.

Neil, who currently serves as executive editor for audience engagement at the Echo, will become senior editor, customer, for Reach in the North West.

He has previously held roles at the Echo including head of web and data development.

In 2015, he was seconded to the role of publisher at Reach’s GetReading website to cover Lucy Thorne’s maternity leave.

Announcing his new job on Twitter on Tuesday, Neil wrote: “Big day for me today – I’ve got a new job.

“I’ll shortly be the senior editor, customer, for Reach in the North West.

“Big change after 20 years at the Post and Echo, but I can’t wait and am really excited.”