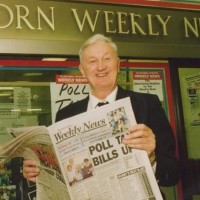 An editor who served his hometown newspaper for 70 years has died aged 90.

Tributes have been paid to Ray Miller, pictured, who edited the Runcorn and Widnes Weekly News.

Ray stepped back from full-time work in 1995, but continued as a columnist for another 20 years with his nostalgia page before retiring from the paper for good in 2015.

HTFP covered his retirement at the time.

Gareth wrote: “Sad news. All started for me with work experience on the Weekly News and the love and respect for Ray was obvious.

“Real passion for telling stories and sharing the news. An example of why newsrooms matter.

“A real person with real stories talking face to face can be inspirational.”

Weekly News reporter Oliver Clay added Ray was a “lovely bloke with a sparkling affection for the patch and the paper”.

Runcorn-born Ray was just 14 when he started out at the Weekly News as a copy boy in 1945, cycling to deliver stories to the sub-editors, after being recommended for the job by a teacher.

He was later promoted to junior reporter, responsible for collecting sports results, before going on to cover Runcorn Football Club’s reserves and then becoming a general reporter.

As editor in 1980, when the newspaper was owned by Swale Press, he saved it from closure during a printers’ strike when he and his colleagues pooled their redundancy payouts to pay for issues to be printed in Nottingham after weeks out of circulation.

Following the rescue, the newspaper thrived and caught the eye of Thomson Regional Newspapers, which bought it in March 1982 and brought it under its Chester operation.

Ray later stepped aside from the role of editor, becoming deputy to Eric Langton who went on to become editor-in-chief of the Chester Chronicle.

He died peacefully at Warrington Hospital around two weeks after being taken ill with pneumonia.

Ray’s son Jeff told the Liverpool Echo a modest funeral ceremony is likely to take place due to the ongoing pandemic.