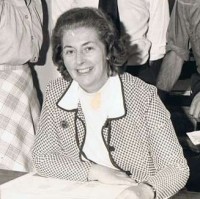 A newspaper editor who later ran a physic magazine has died aged 92 after contracting coronavirus.

Tributes have been paid to Kay Hunter, pictured, who edited the Diss Express between 1971 and 1976 and later returned in 1991 to work as a columnist.

During her career, Kay also edited and contributed to the specialist magazine Psychic News.

Martin Ward, who joined the Diss Express as a reporter in 1973, credited his former editor for “breathing new life into the paper”.

He told the Express: “Kay brought her calm leadership to the Diss Express when its survival was in doubt. In its new tabloid form, she gently steered it back to health.

“I wrote and asked her for a job. We talked on the Friday and it was a case of ‘Start Monday – and, oh, bring your own typewriter’.

“She had trust and confidence in her small team and we hardly felt her presence – yet her warmth and gentle guidance generated in us great self-discipline.

“We laughed a lot, but routine work got done, and we still had the freedom to go out and find our own stories.

“She inspired huge loyalty and, later, friendship, too. She wrote like an angel: I learnt so much from her. It is so sad that she is gone.”

During her time at the Express, Kay introduced Mere Quacks, a weekly cartoon drawn by cartoonist Mike Webb, which remains a mainstay in the paper almost half a century later.

Mike said: “A friend of mine got a job at the Diss Express after finishing university, and he said if I was interested he would mention about the possibility of a cartoon.

“When he mentioned it to Kay, she said it would go quite well with the new look of the paper, which had only recently gone down to a tabloid.

“She suggested the idea of ducks as the characters, because of the Mere nearby. I’d never done cartoons like that before, where you had to think up jokes, and it’s done me a lot of good.

“When I started on my career as a self-employed painter, people already knew about me, which I have Kay to thank for.”

She was admitted to Norwich University Hospital on New Year’s Eve after a fall at home, but died on 24 January after being diagnosed with Covid-19.

Kay is survived by her two sons, Paul and Graeme, and four grandchildren, Phoebe, Felix, Rosie and William.