An editor has urged his readers to back a “once in a lifetime” bid to become UK City of Culture 2025.

Wakefield Express editor Gavin Murray has called on people in Wakefield to lend their support to the campaign.

Wakefield is one of 20 places to vie for the title.

In an open letter, Gavin called for everyone in Wakefield to back the city’s bid. 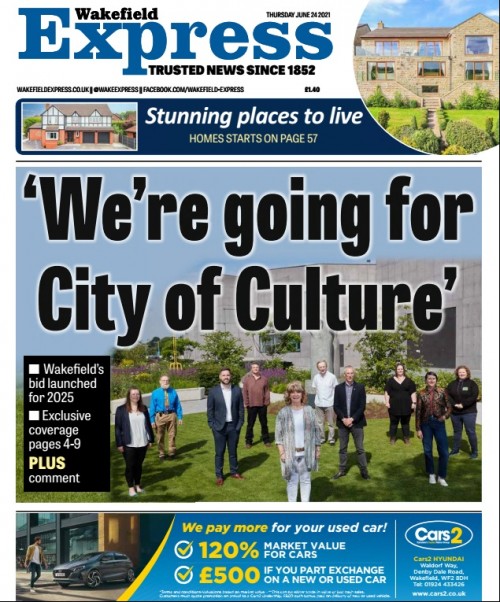 The Express has backed Wakefield’s bid throughout this summer

He wrote: “Wakefield as a district has a unique cultural offering and can now rightly declare itself to be home to world class attractions and businesses.

“Being successful in our bid for UK City of Culture for 2025 brings a once in a lifetime opportunity to build on the cultural assets that already exist, create new and exciting possibilities, some yet to be imagined, leave a lasting legacy and reinforce our identity for future generations.

“The arts, culture and heritage already play a significant role in the district’s economy.

Gavin described the bid as a “chance for the city and district to take the next steps of development”.

He added: “It is a chance to change perceptions of what is possible for this already great city, build new industries within the creative sector and improve the lives and well being of all who live, work and visit the city.

“The Wakefield Express stands shoulder to shoulder with Wakefield Council to bring UK City of Culture 2025 home to the district.”