An editor has thanked a football manager whose sacking he believed was a “joke” when he was first informed by his sportsdesk.

David Powles has paid tribute to Daniel Farke, who was dismissed from his role with Norwich City on Saturday – just hours after his team had defeated Brentford 2-1 in the Premier League.

David, who edits the Eastern Daily Press, has written an editorial about how the news came to light after an embargoed “heads up” was given to his journalists while he himself was at a fireworks display.

Mr Farke had led the club to two promotions during his tenure, but City are currently bottom of the Premier League table with just five points from 11 games. 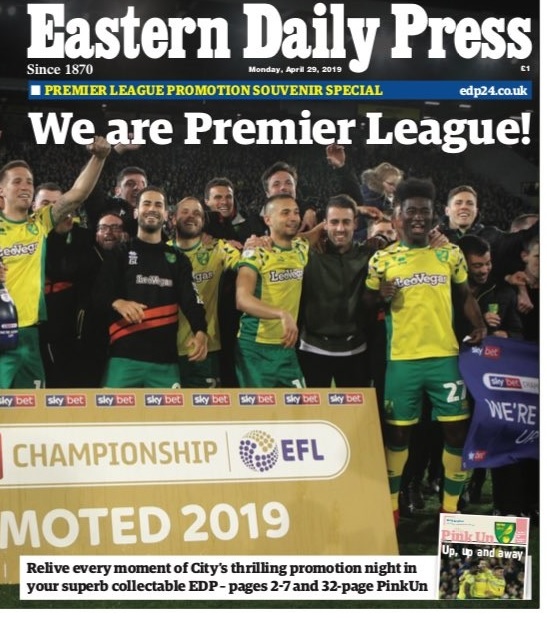 How the EDP covered City’s promotion in 2019

In his editorial, David described the sacking as “one of those ‘where were you when’ moments”.

He wrote: “In this era of pre-announcements and so-called social media ITKs (in the knows), genuinely surprising and shocking news of this nature occurs less frequently.

“However, the unique timing of the announcement, in terms of it being immediately after a win, means it wasn’t just the many fireworks displays causing a stir on Saturday night.

“I was at a fireworks display in Little Melton when the news first arrived, 45 minutes before the formal 7.30pm confirmation, via a phone call from one of our NCFC reporters covering the Brentford game.

“As you may imagine, the media will occasionally be given a heads up to such news and in this case the media team at Norwich City had told the [EDP sports supplement] Pink’Un team, under a strict embargo, so they could ferociously spend the next 45 minutes preparing the various breaking news stories and analysis. Only their editors were allowed to be informed.”

“Our sports reporters have no history of this, but my first reaction was that it was a joke and so followed a frantic call to the team to confirm they weren’t giving their editor the wind-up.”

David was then presented with his own “challenge” at the fireworks display of discussing how the news would be covered without “giving other families present their own exclusive”.

He added: “For years to come I, the sports team and, judging by the discussions in the office on Monday morning, many others, will always remember where they were when Farke got the boot.

“Just as we will always remember Daniel Farke himself. A manager who will go down as one of the most successful and most loved in the club’s recent history, despite his struggles to deliver success at the very top level.

“So thank you Daniel Farke. Thank you for not just helping to provide football memories I will cherish, but ones that I will forever share with my family. Just how it should be.”