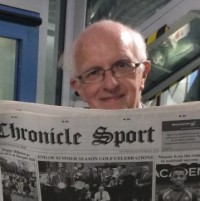 An editor has retired aged 77 after serving the same group of local newspapers for almost six decades.

David Jones has said farewell to his role with the Glossop Chronicle after 58 years in regional journalism.

Despite his retirement, he will continue to contribute to the Chronicle nostalgia page, which will see him reviewing headlines he himself wrote half a century ago.

David, pictured, will also continue his ‘Watchman’ comment column as the voice of ‘Mr Glossop’.

Nigel said: “David is a journalistic institution having dedicated his life – and the last 58 years – to telling the local news.

“He may be ‘retiring’ but it’s also wonderful to know he will still be carrying on, sharing the headlines from yesteryear as he remembers them and even contributing the odd story here and there.

“I would like to thank him especially for his unwavering support and professionalism over the last 20 years I have had the privilege of working alongside him – not least when times – like now – haven’t always been so easy or certain.

“I would also like to thank him for being a very good friend over the years and for his wonderful wisdom – and great sense of humour which we have certainly all missed in the office as he has been working from home during the pandemic.

“David is well-loved by the people of Glossop and it is testament to his professionalism that many have contacted us with good wishes on his retirement.

“So thank you Mr Glossop for all your hard work over the years and enjoy your retirement, you certainly deserve it.”

As well as the Chronicle, David worked on the former North Cheshire Herald – part of Ashton Weekly Newspapers.

Major stories he covered included the Moors Murderers’ first appearance at Hyde Magistrates’ Court and the crimes of serial killer Dr Harold Shipman, who he had known personally and was previously approached by to run an appeal in the paper to raise money to buy surgical implements.

David’s career in journalism was recognised when he won the Stand Out Award at the O2 Media Awards for the North West in 2017.

Chris Bird, executive chairman of Chronicle owner Quest Media Network, said: “David Jones is the heartbeat of our business, his legacy immense, he has inspired generations of young journalists and, above all, he has served his communities for over 58 years delivering great news stories, supporting local good causes, challenging politicians, covering heart-breaking stories with great care and compassion whilst ensuring the next generation of local journalists always had his support.

“David Jones is a true local hero that thousands of people in Tameside and Glossop will want to wish well on his next big story.”