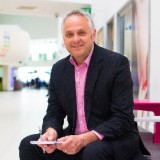 An editor has opened up on threats made against his wife and children by a former football club chairman who also made daily abusive phone calls to his journalists.

Former Northern Echo editor Peter Barron has gone public on the threats and abuse faced by him, his family and his staff at the hands of George Reynolds, the ex-chairman of Darlington Football Club who was later jailed for tax avoidance.

Following his death, Peter has now written a column for the Darlington-based daily opening up on his “bad, and often frightening dealings” with Mr Reynolds, who took over the club in 1999, during his time in charge at the Echo.

Peter, pictured, wrote: “George soon came to view the Northern Echo – and just about everyone else – as the enemy. He picked fights with members of the community who opposed his plans, along with journalists whose names appeared on less than favourable reports on the news or sports pages.

“His daily calls to the newsroom became more and more abusive and threatening. Deputy editor Chris Lloyd, a gentle soul who couldn’t fight his way out of a paper bag, endured one memorable tirade, in which George screamed: ‘I’ll wrestle you, in the marketplace, stripped to the ******* waist – we’ll sell tickets for ******* charity.'”

Peter went on to recall a phone call in which Mr Reynolds threatened to “write headlines” about him, as well as more “chilling” threats.

He wrote: “The next day, he erected a huge billboard outside the stadium, and posted weekly ‘headlines’ in enormous letters. They included SACK BARRON, BARRON IS A LIAR (complete with a picture of Pinnochio), and his carefully considered coup de grace, BARRON IS GAY. It’s a strange feeling, driving to work past a football stadium, and not knowing what’s coming next.

“The acrimony continued to boil over as the club’s fortunes spiralled towards ruin, and George resorted to turning up on journalists’ doorsteps with chilling words of warning to be careful what we wrote.

“The final straw came when my wife and I had returned from a family holiday with our four young children. While we were unpacking the car, one of the kids came out of the house to announce: ‘George Reynolds has been!’

“Unaware that we were away, George had paid a number of visits to the house, shouting obscenities through the letterbox and leaving a series of signed calling cards on the doormat, with messages such as ‘Let’s see how your kids cope’ and ‘Your wife will have a nervous breakdown.’ I don’t care what anyone says – that’s not funny.

“A neighbour had filmed it all from a bedroom window, and the calling cards were handed over to Darlington police.

“They chose not to prosecute, with an inspector explaining: ‘You’re a journalist – it’s part of the territory, isn’t it?’ I disagreed, and pointed out that my wife and children weren’t journalists, but the police were unmoved.”

Peter later remembered “punching the air” when Durham Police confirmed an exclusive story that would lead to Reynolds being jailed for tax evasion and money laundering.

In his column, he concluded: “I can’t pretend that I found George Reynolds to be anything other than pretty obnoxious, though I completely accept he was a remarkable character, with a colourful life story that could easily be turned into gritty comedy drama with sinister twists.

“Did it all really happen 20 years ago? It really did – and it was utterly surreal.”