An editor has set his sights on a circulation boost after a campaign launch helped his newspaper “strengthen” its ties to organisations on its patch.

Oli Poole has reflected on the launch of a campaign aimed at getting visitors to the West Sussex Gazette’s patch to respect the countryside.

HTFP reported earlier this month how the Gazette had launched the campaign after running a special report on the updated Countryside Code.

This week the title splashed on an update to the campaign, including parliamentary backing for it. 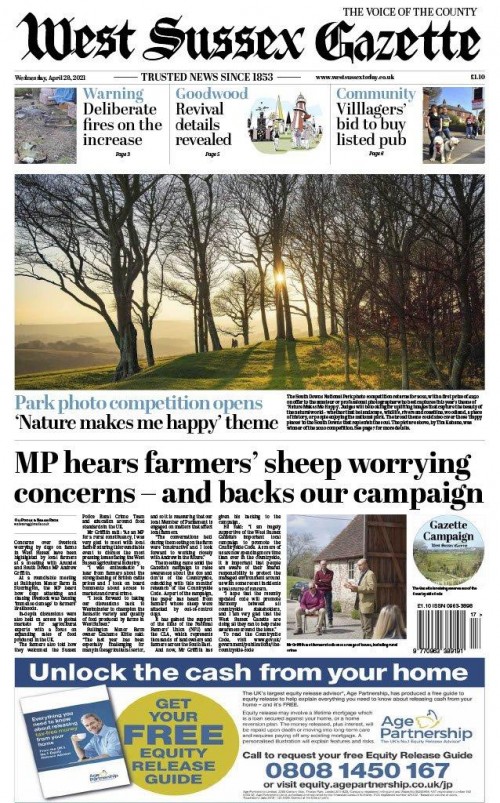 Oli told HTFP: “The campaign has been running for four weeks and it has been a very worthwhile exercise. It has coincided with some work we’ve been doing to try to boost the circulation of the Gazette, so hopefully we have maximised its reach.

“We felt it was important to raise awareness of the code and unfortunately this was proved correct when, a week later, a farmer had to put one of his ewes down after a dog attack.

“It was a very distressing incident for those involved but it was a powerful reminder of why people need to be aware of the code – and indeed the law.

“Aside from putting the spotlight on the code, the campaign has been beneficial for the Gazette.

“It has strengthened our ties to rural organisations and it was reconnecting with the National Farmers’ Union that enabled us to get the dog attack story, as they were keen to work together on the issue and thought of us after I got in touch about our campaign.

“We have run three front pages linked to the campaign, including the latest which saw one of the area’s MPs add his backing. We will continue to highlight aspects of the code as and when appropriate.”