Editor and journalism trainer who was ‘great character’ dies aged 82 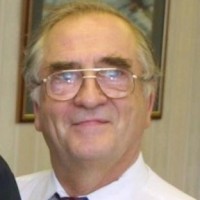 An editor and journalism trainer who was a “great character” has died aged 82.

Tributes have been paid to Hector Lloyd-Jones, who edited the Denbighshire Free Press and later became training officer at North Wales Newspapers.

Hector, pictured, also took responsibility for health and safety matters at NWN during the latter part of his career.

Martin Wright, editor-in-chief of the Shropshire Star and Wolverhampton daily the Express & Star, was among the journalists to have been trained by him.

He told the Free Press: “Hector was a proper old-school journalist and a great character to have around, particularly to those starting out in the industry.

“When I joined North Wales Newspapers, as it was then called, as a trainee in 1997, Hector was in charge of training.

“He had a great knowledge of journalism, having spent many years in the industry, and his patience in imparting that knowledge helped me enormously on my path to becoming a fully qualified reporter.

“Nothing was ever too much trouble and he was always happy to answer the many questions thrown at him. I continued to work closely with Hector for several years while he helped me become an NVQ assessor myself, and he was always ready with advice and support when I became an editor.

“I owe him a great debt of gratitude and I know there will be many other former NWN trainees who feel the same.”

He said: “I remember vividly going for my interview for the trainee reporter’s job at the Free Press on a Saturday morning when I was quizzed by Hector and the then editor, John Euryn Jones.

“Hector was the epitome of what I expected a journalist to be, a bespectacled pipe smoker who was also clearly a great character.

“I feel very fortunate to have been given an excellent grounding in journalism by Hector and Euryn who not only taught me the essential skills needed to become a fully-fledged reporter but also about the importance of integrity.

“Hector was an able and kind mentor but he was also a shrewd operator who taught me a few things that were not in the book.

“He will be greatly missed and my thoughts are with his family at this difficult time.”

Hector worked on the Western Mail before joining the Free Press in the 1970s.

He was initially deputy editor there before being promoted to the top job.

Alistair Syme, another former editor of the Free Press, told his old paper: “I count myself fortunate as a young reporter to have worked alongside Hector who taught me probably more than anyone else about journalism.

“He was kind, generous and very knowledgeable about just about every aspect of the job and that’s what made him such an excellent trainer of young journalists for North Wales Newspapers.

“He could literally sketch out a story on the back of a fag packet and he was never without a notebook in his pocket or a pipe in the corner of his mouth as he rattled out the ‘Mole’ column, the Free Press’s best-read page back in the 80s, amidst clouds of tobacco smoke.

“It had Glyndwr Council chiefs gnashing their teeth in frustration at where Hector picked up his information – but they never found out.

“They simply don’t make journalists like him anymore and my condolences go to his family.”

Hector died at his home near Denbigh on 9 January.

He leaves behind his wife Vicky, daughter Cathryn, stepchildren Gen and Cai and brother Elphin.

A private funeral service will be at St Asaph Crematorium this Friday and donations in lieu of flowers will go to the Wales Air Ambulance.