The Liverpool Echo has demanded a change in the law after the last trial relating to the 1989 Hillsborough disaster collapsed.

The Echo has long campaigned for justice for the 96 Liverpool football fans who died in the tragedy at Sheffield Wednesday’s Hillsborough stadium 32 years ago.

The campaign was dealt a blow when a judge ruled on Wednesday two former South Yorkshire Police officers and a solicitor who worked with the force had no case to answer.

It means just one person has been successfully prosecuted in relation to the tragedy, for a health and safety breach, despite a jury inquest previously finding the 96 victims were unlawfully killed. 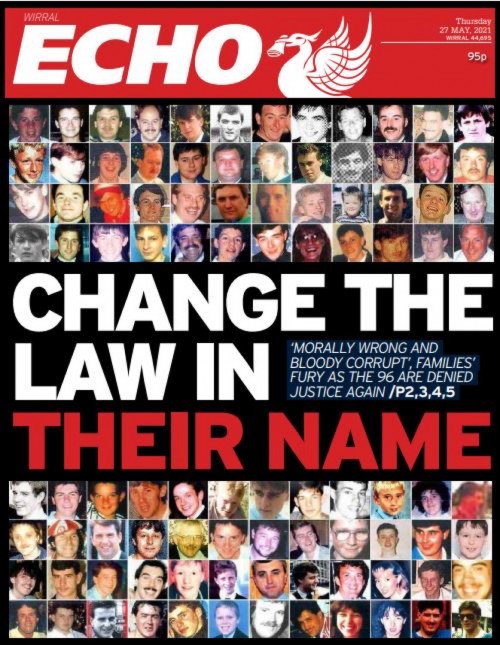 Mayor of Greater Manchester Andy Burnham, who has been a campaigner for families of the victims, has now called for the introduction of a Hillsborough Law, which would include a duty of candour for police.

The Echo’s front page yesterday featured images of the 96 as well as a call for the new law to be implemented.

In a column for the newspaper, he wrote: “I wrote dozens of reports for the Echo, each one with shocking and appalling details of what happened on the day of the disaster or in the aftermath.

“Some people rightly lost their jobs because of details that were contained in that evidence, or because of their responses to the panel.

“Having read the evidence, I always believed that someone would be held responsible in a court of law for the terrible events at Hillsborough, and the subsequent cover up.

“Each piece of evidence built a picture of contempt for the fans and an ingrained culture that refused to accept responsibility for the disaster.”

David added it was “beyond doubt that the stadium was unsafe, that the emergency response was woefully inadequate, and that a huge cover up of those failings that sought to pin the blame on the fans was perpetrated”.

He concluded: “And now the legal system’s appalling inability to deliver justice can be added to that awful list of shameful failings.

“This is another immeasurable stain on the justice system in this country.

“Now and always our thoughts should be with the families and survivors – they’ve been failed yet again.”