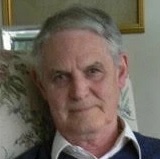 Civic chiefs have shared their “disgust” after a memorial plaque to a former regional journalist was stolen.

The memorial to Bruce Robinson, pictured, and his father Frank was taken from the tree to which it was nailed in Long Sutton, Lincolnshire.

Bruce, who died in 2016 at the age of 80, worked at the Lincolnshire Free Press and Spalding Guardian during his career, as well as the Eastern Daily Press.

He also authored more than 20 books on subjects including local history, walking, roads and tracks, and football.

The bronze alloy plaque was unveiled in July 2019 to honour the Robinson family for their work in recording Long Sutton’s history.

Long Sutton Civic Society chairman Tim Machin told the Free Press he believes the plaque may have been stolen for a small amount of scrap value.

He said: “This is the equivalent of stealing a gravestone or removing a war memorial.

“It is disgusting. For the value of the plaque can only be a small number of pennies so I cannot understand why people would destroy a memorial of its kind.”