A deputy editor has handed over life-saving equipment after raising thousands of pounds in memory of two relatives who died after suffering heart attacks.

Donald Morton, who is second in command at the Stirling Observer, has raised more than £5,700 for the installation defibrillator and the British Heart Foundation.

HTFP reported in April how Donald was walking 100,000 steps for charity in memory of his brother Willie, a former professional cricketer.

A week into the challenge, Donald’s family was hit with another tragedy when his eldest niece Rona died of a heart attack aged only 54. 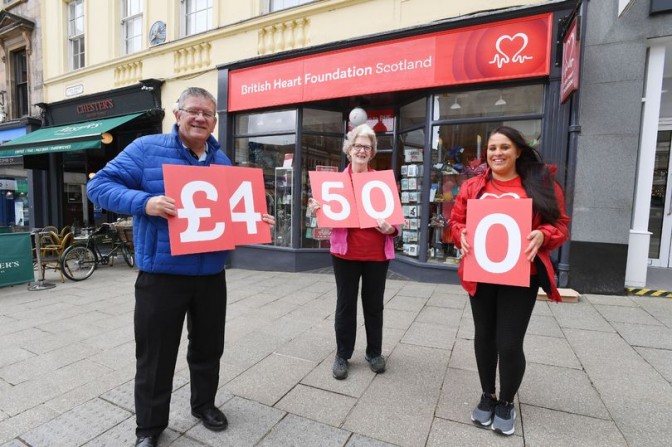 Donald told the Observer: “The original target of £800 was smashed within 18 hours and it just kept climbing.

“I had donations from family, friends, people I went to school with, Stirling Observer readers, friends of Willie and Rona – it’s just been fantastic.

“I also received £100 from the Co-op Community Fund which was great.”

He added: “There are so many people to thank – walking buddies including Willie’s son Keith and his daughter Ava, who was born just a few months after he died, and Rona’s sister Mhairi who came out one day along with her daughter Sophie while my big brother Harry walked with me and his daughter Hilary also joined in.

“Special thanks go to my own immediate family – my main walking buddy was my wife Catherine, younger son Alasdair, older son Chris and his wife Hailey and my grandchildren Olly and Emma who gifted me special socks with ‘Walk for Willie’ and also some walking trainers.

“A big thank you also to my old pal Scott McDonald who organised the defibrillator through MacGregor Industrial Supplies Ltd in Inverness.”